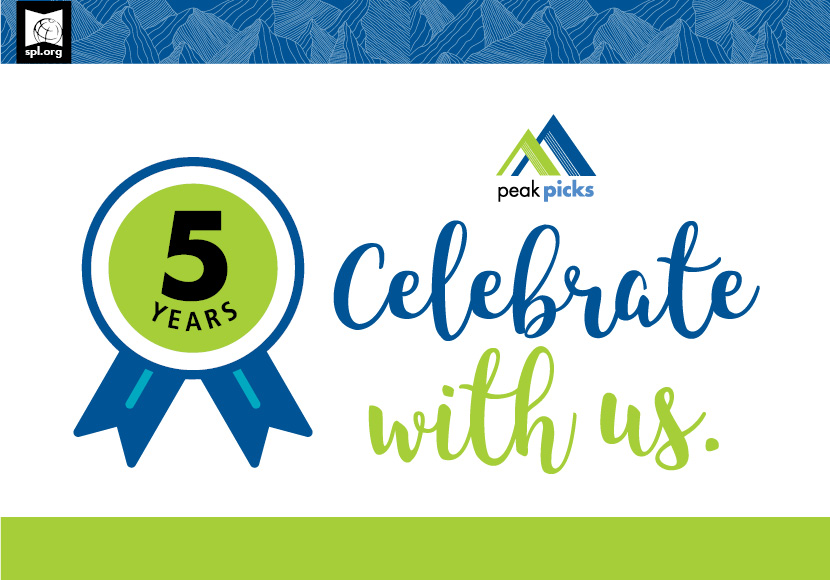 Blow out the candles! Peak Picks, The Seattle Public Library’s popular collection of books you can check out with no holds and no wait, turns 5 this month. Launched as a pilot project in May 2017, Peak Picks expanded to all 27 Library locations by the end of 2017. Since its start, more than 75,000 readers have checked out more than 700,000 copies of Peak Picks titles.

“In five years, Peak Picks has earned its spot as one of the Library’s most beloved services,” said Frank Brasile, a Selection Services librarian who helps create the collection. “Celebrate with us by stopping by your neighborhood branch, finding the blue-and-green display, and checking out a Peak Picks book we’ve selected just for Seattle readers.”

Funded initially by the 2012 Library Levy and now by the 2019 Library Levy, Peak Picks is designed to make more copies of popular, high-interest adult fiction and nonfiction books immediately available to patrons. Instead of waiting weeks or months for holds to be filled, patrons can walk into a branch and find books they’ve heard about available for checkout right away, along with books representing underrepresented voices and unique perspectives, and books by local authors.

The checkout time is shorter than other Library books – two weeks instead of three – but titles are selected with this in mind: For example, Peak Picks books typically don’t exceed 400 pages.

When Peak Picks was launched at eight Library locations, its collection included 12 titles, ranging from “Exit West,” by Mohsin Hamid to “March: Book One,” by John Lewis, to Margaret Atwood’s “The Handmaid’s Tale” (timed to coincide with the launch of the Hulu series). It has been popular from the start. The year after it launched, Peak Picks contributed to the Library’s overall increase in checkouts of physical materials at the Library at a time when many readers were switching to digital books (e-books and e-audiobooks). By the fall of 2019, Peak Picks was averaging more than 19,000 checkouts per month (circulation declined during the COVID-19 Library closures but is now rebounding).

Peak Picks titles are hand-selected by a team at the Library that makes sure each book contributes to an overall collection of diverse authors and viewpoints. They select upcoming titles – 6 to 10 are added each month for an active collection of 50-60 titles – months ahead of time, so that Peak Picks show up on shelves just after release and when interest is at its, yes, peak.

Each month’s selection includes highly anticipated books (recent examples include Emily St. John Mandel’s “Sea of Tranquility” and Viola Davis’ “Finding Me”), as well as titles expected to be of interest to Seattle readers, even if they may not be national bestsellers. An example is last year’s “We Hereby Refuse” graphic novel, published by the Wing Luke Museum and Chin Music Press, about Japanese American resistance to World War II incarceration.

“This dual focus allows us to tap into the broader cultural conversation while also amplifying underrepresented voices and highlighting regional authors that provide a uniquely Seattle perspective,” said Brasile.

What do Library readers love about Peak Picks? Over the years, Peak Picks fans have cited the joy of both finding a much-hyped new release immediately available, and of discovering something completely new. Parents have praised the ease of browsing – and finding – titles in the Peak Picks displays while keeping an eye on a wandering toddler. Book club members have found their multiple-copy problems solved. One patron suggested that the designer of the program should earn a Nobel Prize. Another compared browsing a Peak Picks display to “visiting the proverbial candy store.”

But perhaps this patron sums up what the Peak Picks collection does best – both forecasting and capturing Seattle readers’ interest:

“I love browsing through a curated collection of current books to find interesting reads. They have introduced me to books I would never have found otherwise. Thank you so much for Peak Picks!”

In honor of Peak Picks’ fifth year, patrons are invited to stop by Library locations to browse the Peak Picks tables, grab a five-year bookmark, and share their latest Peak Picks read on social media. Patrons can tag @splbuzz on Twitter and @SeattlePublicLibrary on Facebook and Instagram.

25 most popular Peak Picks titles since 2017

*This list is ordered from highest Peak Picks circulation to lowest.

The Library believes that the power of knowledge improves people's lives. We promote literacy and a love of reading as we bring people, information and ideas together to enrich lives and build community.

Contact the Library’s Ask Us service by phone at 206-386-4636 or by email or chat at www.spl.org/Ask. Staff are ready to answer questions and direct you to helpful resources and information.

(For more information, contact Laura Gentry, head of communications, at 206–915–9028 or laura.gentry@spl.org)